In drawing some graphics or text layout, if still a little bit of alignment you OUT, CorelDRAW provide users with convenient alignment and distribution commands, and these do not have to look for you one by one, you only need to remember a few quick like a bond, using a shortcut alignment command must be two or more than two objects.These shortcuts can memorize fast, easy operation and layout and typography, but also saves time job.

You can find the "Align" panel in four ways:

The first and most efficient, shortcut keys "Ctrl + Shift + A" to bring up the "alignment and distribution of" panel.

The second implementation of the "Object> Align and Distribute" command."Aligned with the distribution of" sub-menu, the menu can only do one step, so not a lot of use.But you can see at a glance all about alignment shortcuts.

The third execution "Window> Dockers> align and distribute" command.Screen appears on the right side "is aligned with the profile" panel.

The fourth selected to align objects (at least two) properties bar, click "alignment and distribution of" command.Screen appears on the right side "is aligned with the profile" panel.

Align function well understood at a glance from the icon.Including left, horizontal center justification, right justification; top-aligned, vertically centered, aligned bottom.Alignment command must be aligned with two or more than two objects.Not only that, CorelDRAW also provides us more align objects: where there are active objects, page edges, center of the page, and specify the grid points.Using these objects as a reference, then it is very convenient. 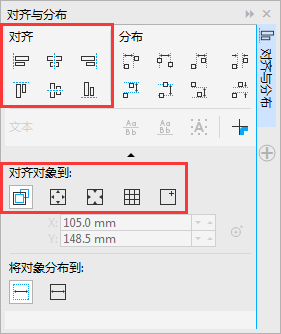 1, using a base at any of the drawing tools to draw graphics on the page displayed. 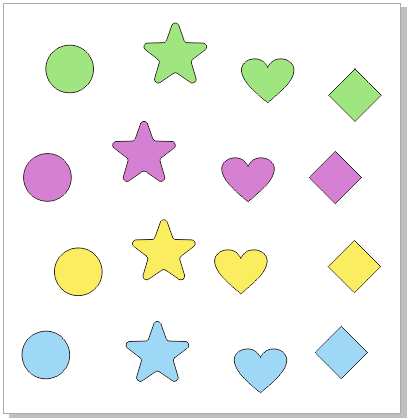 2, the implementation of "Object> Align and distribute" command.In the sub-menu to the right is aligned with the distribution, you can see a lot of shortcuts, These shortcuts can greatly speed up the work efficiency. 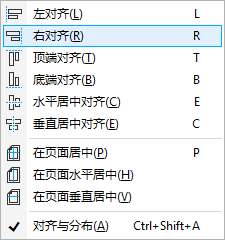 In the middle page (P): This command is really handy, time-tested it, note that if a plurality of individual objects will execute the named all centered on the page, so the first before the middle (Ctrl + G) bit combination.

Left (L): selecting a first vertical circle, in the absence of input state, press the shortcut key "L", will be the first of a vertical left-justified in the standard.

Align Right (R): selecting a second vertical star, in the absence of input state, press the shortcut key "R" will be the first of a vertical right-justified as the standard.

Aligned to the top (T): selecting a first horizontal green pattern, in the absence of input state, press the shortcut key "T" will be selected as the final standard tip alignment.

Align bottom end (B): selecting a second horizontal purple pattern, in the absence of input state, press the shortcut key "B" to the final selection will be a standard alignment bottom.

Shown below, does not use the "E" and "C", and by "distribution" command, to disperse the same arrangement pitch of each object. 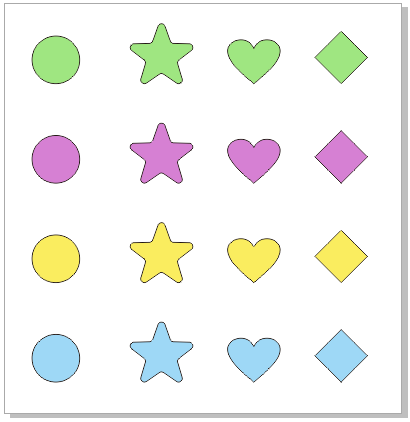 In CorelDRAW software only displays "Align" shortcut, without input method status are: the T, in E, the B, left L, the C, the right R & lt; then "distribution" command and does not display the shortcut key, in the end No distribution function the same alignment as fast operation, related content, please click: shortcuts CorelDRAW distributed object.

CorelDRAW is a versatile and powerful vector graphics design software, allows creativity and functionality combine to create a unique style, more about CorelDRAW tutorial, please click on the CDR Consulting.