When to shape curve objects in the CDR, we will choose to use the shape tool, the shape of the tool will show you draw or edit nodes, icons and preview function.So for a node can be divided into: cusp, smooth and symmetrical.These three switching node can be changed at any time according to need, the behavior of each node of the control handle different types of.

It is used to create a sharp transition points in the curve object, such as sharp corners or.The control handle can be moved independently of each other node in the cusp, and only change the line end node.

Through the node lines followed the shape of the curve to produce a smooth transition between the line segment.Smoothing node control handle always opposite to each other, but they may be different distances from the nodes.

Similar to a smooth node.Creating a smooth transition line segment between them, but both ends of the line of nodes present the same appearance of the curve.The control handle is symmetrical node opposite to each other, and equal to the distance between nodes.

In use cusps, smooth or symmetrical curve object Zaoxing node when the first to use the "shape tool" and click a node activation, we can see in the property column of the three types of nodes. 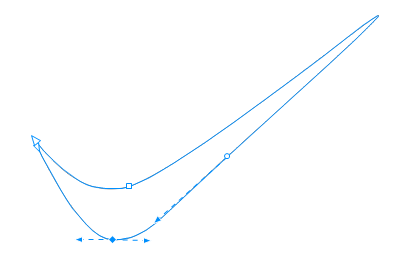 CorelDRAW public official to give you a number to send welfare, and now focus on "CorelDRAWVIP", reply "stuff" there is massive material and other templates you receive, please prepare large hard disk space oh ~